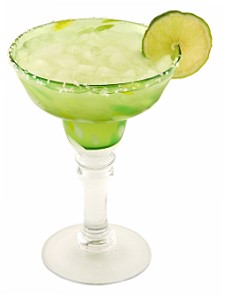 There are many claims to the invention of the Margarita, but the prevailing credit goes to Margaret “Margarita” Sames, a wealthy Dallas socialite. As the story goes, the cocktail was born over the Christmas holiday in 1948.

Margarita and her husband, Bill, invited some friends from Dallas to visit them in Acapulco. She wanted to make a refreshing drink that could be enjoyed poolside before lunch. Tequila was her favorite spirit, so she turned there. Having tasted and enjoyed the orange-based French liqueur Cointreau, she decided to combine the two. At the time, she said, there were no mixed drinks using tequila, which was served in classic style in a shot glass, with salt and a slice of lime.

As she experimented with various combinations of tequila and Cointreau, they were either too sweet or too sour. Eventually she found a recipe that suited her, with lime juice used to balance the alcohol and a light dusting of salt on the glass rim to add pizzazz.

Over the years, Bill and Margarita served the drink to their guests, referring to it as “The Drink” or “Margarita’s Drink.” After Bill gave Margarita a set of champagne glasses etched with her name, the drink got its final name. The cocktail recipe was spread by some of the couple’s friends and guests, who included hotelier Nick Hilton, Tail O’ the Cock owner Shelton McHenry, Hotel Bel-Air owner Joseph Drown, movie stars Lana Turner and John Wayne, and other world travelers who subsequently served the drink in their hotels and restaurants.

Margarita Sames was 35 years old when she invented the cocktail that would become America’s favorite. No matter what your age, as long as you’re of drinking age, you too can invent an immortal cocktail. Just be sure to do a lot of blogging about it, so there won’t be any question years from now, that it started with you.