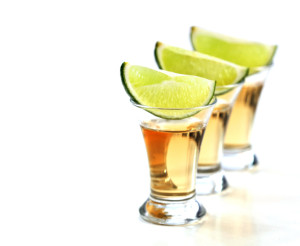 Tequila was first produced in the 16th century near the location of the city of Tequila, which was not officially established until 1656. The Aztec people had previously made a fermented beverage from the agave plant, long before the Spanish arrived in 1521. When the Spanish conquistadors ran out of their own brandy, they began to distill agave to produce North America’s first indigenous distilled spirit.

Some 80 years later, around 1600, Don Pedro Sánchez de Tagle, the Marquis of Altamira, began mass-producing tequila at the first factory in the territory of modern-day Jalisco.

Harvesting the agave plant remains a manual effort, unchanged by modern farming technologies, and stretching back hundreds of years. The agave is planted, tended, and harvested by hand. Piñas (Spanish for pineapples), weighing 40 to 70 pounds, are cut away with a special knife called a coa. They are then shredded, their juices pressed out and put into fermentation tanks and vats. Some tequila companies still use the traditional method (artisanal) in which the piñas are crushed with a Tahona (stone wheel). The musto, (Agave juice, and sometimes the fiber) is then allowed to ferment in either wood or stainless steel vats for several days to convert the sugars into alcohol. Each company keeps its own yeast a closely guarded secret.

The fermented product is then distilled once to produce what is called “ordinario”, a cloudy or milky liquid, and then distilled for a second time to produce a clear, silver Tequila. Some distilleries distill the product again to produce a triple distilled product. However, true tequila experts consider triple distilling of tequila flawed and believe that it removes too many flavor elements from the liquid. From there the Tequila is diluted and bottled as a “silver Tequila”, or it is pumped into barrels to begin the aging process.

Tequila is usually bottled in one of five categories: