Learn more about authentic Mexican food with these recipes from five regions of Mexico, starting in the north and heading south and east. 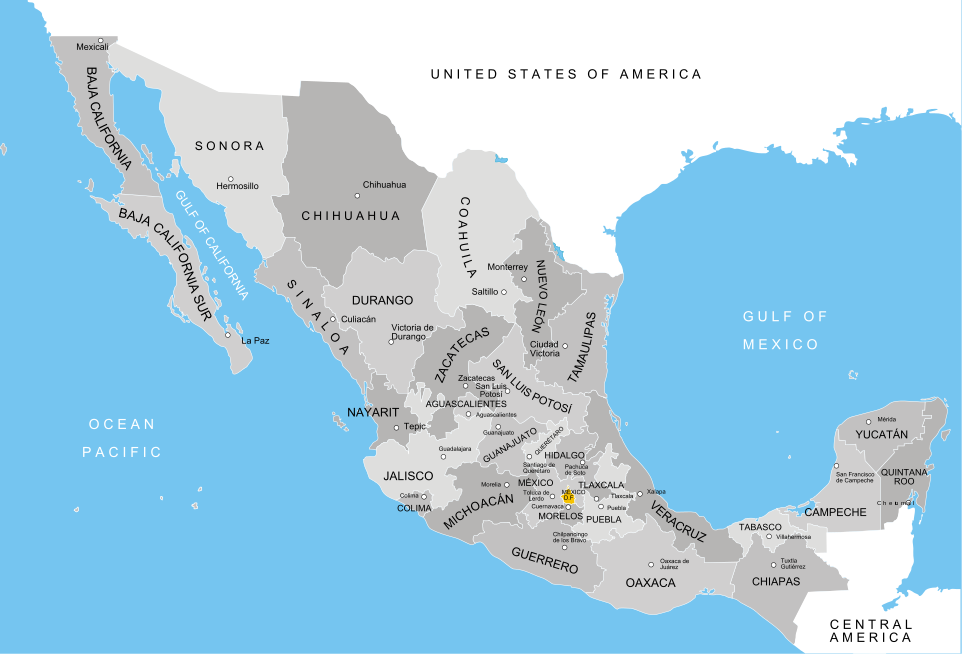 This recipe for cortadillo norteño comes from the northern State of Nuevo León. It’s a simple beef stew that’s comforting and delicious. Serve it alongside potatoes, chiles toreados, and tortillas for an authentic every day meal.

Add tomatoes, salt, pepper, and cumin and cover the pan while simmering mixture over low heat for 30-40 minutes, making sure it does not dry out. If it does, add a bit of water to maintain a saucy consistency.

Taste and adjust seasonings and serve hot with tortillas.

A northern state to the west of Nuevo León, Durango, serves barbacoa (pronounced bar-bah-COH-ah), which is actually where the word “barbecue” comes from. This style of cooking meat originated in the Caribbean with the Taíno people and became a part of Mexican cuisine. Traditionally meat (a cow head or whole sheep) was wrapped in maguey leaves then cooked on a grill over a cauldron of hot water in a deep pit filled with hot coals. Nowadays “barbacoa” can simply refer to meat that is slow cooked by simultaneously steaming and smoking the meat, resulting in a moist, tender and flavorful meat. This recipe for barabcoa tacos uses a slow cooker for more ease.

DIRECTIONS
1. Combine the meat, vinegar, lime juice, chipotle chiles, onion, cumin, oregano, salt, pepper, cloves, bay leaves, and cinnamon in a slow cooker and add enough cold water to cover by about 2 inches. Cook on low for 6 to 8 hours, until very tender.
2. Remove the meat from the pot and let it cool slightly, reserving the liquid. Shred the meat, discarding the bones. Moisten the meat with a few ladlefuls of the reserved braising liquid. Taste and adjust the seasoning.
3. Set the barbacoa on the table in a serving bowl or platter and set out the tortillas, onion, cilantro, limes, salsa, and hot sauce so guests can make their own tacos.

If you’re used to thinking of tacos, this sandwich recipe might not strike you as a typical Mexican dish. Torta ahogada literally means “drowned sandwich” because it gets completely soaked in red dipping sauce made from dried chiles. Less spicy versions of the sandwich, made with a tomato-based sauce, are also available. The bollilo is a traditional type of savory bread baked in a stone oven, similar to a baguette but shorter.

PREPARATION
1. Begin by removing the chiles from the soaking liquid and removing the stems and seeds and chop them coarsely. Heat the lard or oil in a pan, add the onions and cook over low-medium heat until they are translucent. Add the chiles, garlic, habanero, tomatoes and spices and cook for 10-15 more minutes. Let the sauce cool down and blend it until smooth.
2. Cut each bolillo almost in half so that one side is still connected slightly then stuff it with the meat filling.
3. You can either pour all the sauce over the sandwich or dip the sandwich in half way. The authentic way is to smother the sandwich in the sauce, then eat it without hardly getting your fingers messy.

Puebla is a small state east of Jalisco and north of Oaxaca. It’s also the original birthplace of mole – a complex sauce with over 30 ingredients. The sauce has many variations, including sweet, savory, spicy. This diverse sauce can be served over any number of meals, most popularly, enchiladas.

The Oaxaca (pronounced “Wa-ha-ka”) region is home to many eclectic and delicious foods. The local often eat snacks prepared by street vendors and at small traditional markets called antojitos, which means “little craving.” One example is a memela: a round corn base, a little thicker than a tortilla, toasted on a comal (large, flat pan) and topped with beans, quesillo (local stringy, brined cheese), bits of ground pork with spices or eggs, and sauces with varying levels of spiciness.

The Yucatán peninsula in northeast Mexico features cuisine with Asian and Arabic influences as well as the native Mayan cuisines. It’s most famous and representative dish, cochinita pibil, consists of pork prepared with bitter orange and achiote (a traditional condiment), wrapped in banana leaves and cooked in the oven. It’s then served with red onion in lemon juice and sliced habanero pepper.

If you love Mexican food, or if you are interested in learning more about authentic Mexican food, come visit Casa Blanca Mexican Restaurant in Andover, North Andover, Haverhill, or North Billerica, MA.

The only thing I like better than talking about fo

A well-balanced diet is a chip in both hands. 😋

Hear me out… Avocado is a fruit… so guacamole

And on Tuesday we said, "let there be tacos!" 🌮