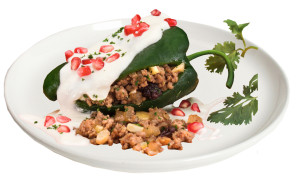 The holiday marks the anniversary of Mexico’s independence from Spain. The people of Mexico begin their celebrations on the eve of Independence Day with the President reading a historic speech and ringing the liberty bell. Everyone cheers, sings the national anthem, and shouts “Viva Mexico!” while confetti and streamers fly through the air. Then on the actual day of la independencia, Mexico erupts in more festivities and of course, delicious food.

The most important thing to have if you are making an authentic Independence Day meal is a chiles en nogada recipe. The reason that this dish is so festive for El Grito de la Independencia is that it includes the three colors on the Mexican flag: red pomegranate seeds, white walnut sauce, and a green pepper. The chiles en nogada recipe is also associated with late summer is because its ingredients are seasonal, and pomegranates can only be found during this time. The dish is thought to have originated in the 1800s and was a patriotic symbol given by the nuns of Puebla to Viceroy Agustin de Iturbide.

*I highly recommend roasting the pork the night before you want to make the dish. You might also want to chop all the fruit so the picadillo is quick and easy to assemble. Also note that the walnuts should be soaked in milk overnight.

Chiles and Picadillo: Preheat the oven to 300 degrees. Place 1 tablespoon lard in a oven-proof skillet, heat on medium-high until rippling. Add the cinnamon, cloves and all-spice, toasting for 1 minute. Add the pork roast and sear on all sides until golden brown, about 3 minutes per side. Add 2 cups water and one white onion chopped and simmer for 5 minutes. Put into the preheated oven for 1 hour. Remove from oven and let rest for 30 minutes. Cut pork into a quarter ince dice. Set aside.

Meanwhile, chop all the apple, peaches and plantain into a quarter inch dice. Soak the golden raisins in the sherry. Set aside.

Roast the poblano chiles on an open flame or under the broiler until blistered and blackened- 3 minutes per side if over a flame, 5 minutes per side if under a broiler. Tightly wrap the chiles in a clean dry towel and let them “sweat” for 15 minutes. When chiles are cool enough to handle, gently remove blistered skin. Cut a slit in the side of the chile and carefully remove seeds.

Roast the tomatoes on a cast-iron comal or under the broiler until blishered and blackened and so flesh yields to touch. Peel off the skin, core and puree in a blender. Set aside.

In a large skillet, on medium-high heat melt butter. Add the chopped pork. Cook until golden brown, about 3 minutes, stirring occasionally. Then add the remaining onion. Cook until the onions are translucent, about 3 more minutes. Add the chopped apple, peaches, plantains, lemon zest and rasins and continue to cook for 5 minutes. Finally add the tomato puree, salt to taste and simmer on low for 15 minutes, stirring ocassionaly.  Taste and adjust seasonings.

Stuff each chile with  about 1/4 cup  picadillo filling, so the chiles are full but not bursting at the seams.

Sauce: Soak the walnuts in the milk overnight. Place the walnuts, milk, sherry, queso fresco, salt and sugar in a blender and blend until a smooth, slightly thick sauce forms. If you prefer a thin sauce add more milk.

Many of the ingredients for this chiles en nogada recipe can be found at your local Mexican grocer.

If a traditional Mexican Independence Day celebration is what you are after, consider visiting one of Casa Blanca Mexican Restaurant’s three locations throughout Massachusetts. We serve authentic Mexican food in a friendly atmosphere, and look forward to celebrating this important Mexican holiday with you. Allow us to do the cooking!

Have you ever tasted a chiles en nogada recipe? Do you think the great flavors are worth all the hard work?