Most of us are familiar with the piñata. 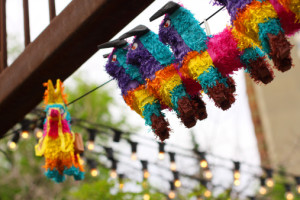 A child’s party just doesn’t seem complete until the kids all take turns swinging at those papier-mâché animals that break open and shower them with candy or small toys. But how much exactly do you know about the piñata? The history of the piñata is actually quite surprising and stretches across the world.

The History of the Piñata in Asia:

While they’re often associated with Mexican culture, it is believed that the history of the piñata begins in Asia. Originally, these brightly colored animals made out of paper were hung up and filled with seeds. People would take turns to hit these paper animals with sticks until the seeds fell to the ground. While in China, the famous explorer Marco Polo stumbled upon these paper creations and brought them back to Europe.

The History of the Piñata in Europe:

Thanks to Marco Polo’s efforts, the history of the piñata continues with the Europeans. By the fourteenth century, piñatas were being used as part of the celebration of Lent. The first Sunday of the Lenten season became known as “Piñata Sunday.” They abandoned the animal shapes, however. Their piñatas were made from clay plots. The word piñata comes from the Italian word pignatta, which actually means “fragile pot.” When the piñata finally reached Spain, the first Sunday of Lent became a fiesta known as “the Dance of the Piñata.” In Spain, piñatas eventually began to be decorated again with tinsel, ribbons, and paper.

The History of the Piñata in North America:

In the 1700s, Spanish missionaries that served in North America attempted to use piñatas as a means of attracting new people to their religion. At this point, the piñata began to drastically change in appearance and took on religious undertones. Piñatas began to feature seven cones that symbolized the seven deadly sins. Over the centuries, the piñata slowly but surely became less of a religious symbol. They began to take on different and bright, colorful shapes again. These days, a piñata is usually thought of as a fun addition to any party.

Even though they did not originate there, piñatas are still a popular symbol of Mexican culture and are often seen at fiestas. If you enjoy Mexican culture and are looking to throw a party, perhaps you’ll consider hosting it at Casa Blanca Mexican Restaurant. We provide a fun, family-friendly atmosphere and we value authentic Mexican cuisine and culture. Feel free to stop by any of our locations in Andover, MA, North Andover, MA, or North Billerica, MA.
What part of the history of the piñata did you find the most interesting? Did you ever have a piñata at one of your parties?