Growing cilantro is a delicate plant to grow, but is very doable when one takes simple precautions, such as avoiding direct, intense sunlight, preparing the seeds properly, and avoiding needless transplanting. 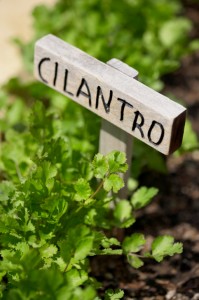 Plan ahead when growing cilantro to be sure you have optimum lighting before you transplant.

When harvesting your cilantro, snip the outer leaves – only about one-third of the plant at a time — so that the new leaves can continue sprouting from the center. Due to the plant’s short life, growing cilantro in an area where it can reseed will save you some time and energy.

Since cilantro doesn’t dry well, growing cilantro yourself is a great way to have continuous access. You can store your fresh leaves by freezing them in cubes of water for the cold season.

Growing cilantro from seed is said to be difficult, but it doesn’t have to be that way. Read on for some tips for growing cilantro as explained in this article by Gardening Know How.

Cilantro is used in a great many different dishes, particularly Mexican and Asian dishes, but despite the growing popularity for this dish in cooking, you do not see cilantro growing in the home garden as much as you do other popular herbs. This may be due to the fact that many people think that growing cilantro is difficult. This is not the case at all. If you follow these few tips for growing cilantro, you will find that you will be successfully growing cilantro in no time at all.

In cooking, cilantro seeds are called coriander. The “seeds” are actually two cilantro seeds encased in a husk. The husk is hard, round and is light brown or grey in color. Before you plant them in the ground, you need to prepare the cilantro seeds to increase the chances that they will germinate. Gently crush the seed husk holding the two seeds together. Soak the cilantro seeds in water for 24 – 48 hours. Remove from the water and allow to dry.

How to Plant Cilantro

Once you have prepared the cilantro seeds, you need to plant the seeds. You can either start cilantro indoors or outdoors. If you are starting the seeds indoors, you will be transplanting cilantro to the outdoors later on.

Put the seeds in the soil and then cover them with about a 1/4 inch layer of soil. Leave the cilantro growing until it is at least 2 inches tall. At this time, thin the cilantro to be about 3-4 inches apart. You want to be growing cilantro in crowded conditions because the leaves will shade the roots and help to keep the plant from bolting in hot weather.

If you are transplanting cilantro into your garden, dig holes 3-4 inches apart and place the plants in them. Water thoroughly after transplanting.

The most important thing to remember when growing cilantro is that it does not like hot weather. Cilantro growing in soil that reaches 75F will bolt and go to seed. This means that the ideal cilantro growing conditions are cool but sunny. You should be growing cilantro where it will get early morning or late afternoon sun, but be shaded during the hottest part of the day.

Even with ideal cilantro growing conditions, this is a short lived herb. Taking the time to prune cilantro frequently will help delay bolting and prolong your harvest time but no matter how much you prune cilantro it will still eventually bolt. Plant new seeds about every 6 weeks to keep a steady supply throughout the growing season.

Cilantro will also reseed in many zones. Once the cilantro plant bolts, let it go to seed and it will grow again for you next year. Or collect the cilantro seeds and use them as coriander in your cooking.

So as you can see, with just a few tips for growing cilantro you can have a steady supply of this tasty herb growing in your garden.

In addition, when growing cilantro, be sure to keep a steady water supply in order to keep the soil moist, but not soaked, and plant in a deep container to properly house the root system. Because cilantro is a quickly maturing plant, it’s a good idea to continue growing cilantro throughout the season by planting a new crop every 3-4 weeks. Snipping the soft top stems regularly is a good habit to get into and will help prolong the harvest. Even so, cilantro has a short life span of only a few months.

To enjoy eating cilantro without the challenge of actually growing cilantro, visit us at any of our 3 Casa Blanca locations in Massachusetts. We use the herb in many of our authentic Mexican dishes, including the complimentary salsa that we serve as an appetizer with homemade tortilla chips. Or better yet, do both. Grow cilantro at home to enjoy any time, and visit us to enjoy cilantro without having to cook. We’re here for you 7 days a week.

Have you ever faced the challenge of growing your own cilantro? How did it work out for you? Do you have any tips of your own to share with our readers who will be growing cilantro in the upcoming season?

Happy hour is upon us. Enjoy dining in. Takeout op

Pouring a glass of this cherry delicious beverage

Deciding what to order can be hard. Taco your time

Dinner is always a party with the fiesta burrito!