Have you ever tried Mole? This classic Mexican sauce is perfect for all occasions! 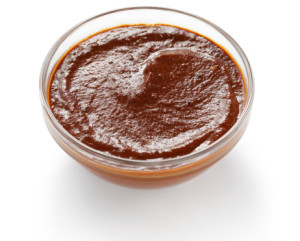 Mole Sauce has been popular in Mexico for years; it is enough of a cultural motif that three different Mexican states claim ownership over the condiment. One myth behind its creation takes place in the Convent of Santa Rosa in Puebla, when a group of nuns combined all the food that they had, including chili peppers, bread, chocolate, nuts, and spices to create a dish for the archbishop. According to legend, the word “mole” originates from the word “mix”, referring to the mixture that the nuns had created. Today, the sauce has many derivations, and still uses a mix of ingredients, but always includes chili pepper.

Mole Sauce is incredibly popular in Mexico! 99 percent of Mexicans have tried the sauce at least once in their lifetime. The sauce is widely celebrated throughout Mexico. The community of San Pedro Atocpan has held an annual festival since 1977, and the largest pot of Mole Sauce ever (enough to feed 11,000 people) was made in 2005 at a festival in the city of Puebla.

To try this great treat at home, check out this recipe by Martha Stewart!

This chocolate mole is bound to be the life of your party!

For more tips and tricks about Mexican cuisine, visit our blog. Or, if you don’t feel like cooking, come visit Casa Blanca Mexican at one of our locations in Andover, North Andover, Haverhill, or North Billerica, MA.