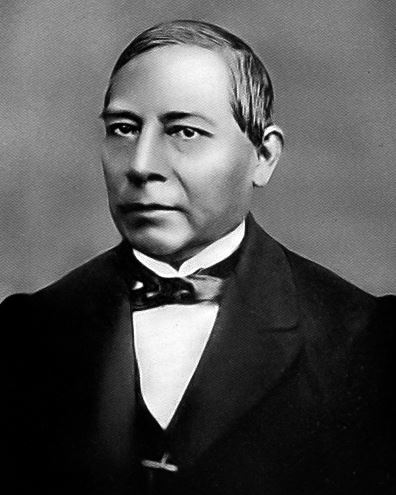 Benito Juárez, or Benito Pablo Juárez García was a Mexican lawyer and politician from Oaxaca, Mexico, who served as the president of Mexico from 1858-1872. Many know of him because he was responsible for helping to overthrow the Second Mexican Empire and restore the Republic, as well as using liberal measures to modernize Mexico. Others remember Juárez for his passion for the native people of Mexico, and at 4 ft 6 inches, for being one of the shortest presidents in world history!

Juárez got his start as a lawyer, then not ten years later became a judge in 1841. From 1847-1852 Juárez was the governor of the state of Oaxaca. He was a strong leader who supported the war effort against America during the Mexican War, but his strong opinions and objections against military leader Antonio López de Santa Anna (who later became known as “The Napoleon of the West”), landed him in exile.

Elected as president of Mexico in 1861, Juárez stepped into office during a turbulent time in Mexico’s history. The Mexican War had severely damaged the country’s economy and infrastructure, and other countries such as France, Spain, and Great Britain were going increasingly frustrated over Mexico’s unpaid debts. Soon, word spread that Emperor Napoleon III intended to overthrow the Juárez government and begin a new Mexican empire.

When the French intervened in Mexico in 1862, Juárez and his elected government were forced to flee Mexico City and take up residence in a couple of different cities, eventually landing in what is now Ciudad Juárez, Chihuahua. As he fled, Emperor Maximillian I became the first and only monarch of Mexico. His scheme with Napoleon III to invade, conquer, and rule Mexico could not be called a success, as he was defeated in 1867. Before fleeing Mexico, Juárez was granted an emergency extension of presidency, which went into effect in 1865 when his current term would come to an end. The extension lasted until 1867, when the Maximilian I was defeated. It was then that Juárez stepped into Mexican history.

Today, the former Mexican president is remembered for being a progressive reformer who fought strongly for his country’s native peoples. In Mexican history, the period which encompasses his national leadership is known as La Reforma del Norte (The Reform of the North). Today, the birthday of Benito Juárez is celebrated as a public holiday in Mexico on the third Monday of March each year. Juárez is remembered well, and many people in Mexico remember his famous words: “Entre los individuos, como entre las naciones, el respeto al derecho ajeno es la paz“, meaning “Among individuals, as among nations, respect for the rights of others is peace.”

If you are interested in learning more about Mexican history or culture, be sure to read our blog! To taste delicious Mexican cuisine, come to visit any one of our Casa Blanca locations in Andover, North Andover, Haverhill, Methuen, and North Billerica. We look forward to dining with you!