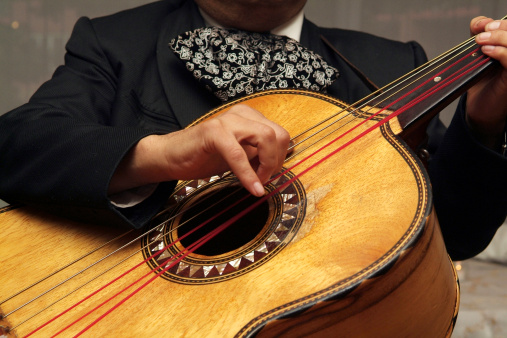 The origins of the name “Mariachi” are still a mystery to this day. It was said to have come from the French word for “marriage” dating back to the French occupation of Mexico in the 1860’s. Given how mariachi bands were often seen playing at weddings, this was the popular theory for many years. It was even promoted on record sleeves and travel brochures, but has since been proven incorrect by historians. It is now thought to be of indigenous origin, representing the wood used to create ancient instruments and dancing platforms. Though the name has long remained a mystery, mariachi goes far beyond music.

The Rise of the Mariachi

The mariachi movement began in Jalisco, Mexico during the 19th century; but the common perception of the mariachi as we know them today was developed in the early 20th century. The music was transformed from regional folk to an urban phenomenon and came to represent all of Mexico. After the Mexican revolution, the Mexican government was heavily involved in cultural promotion as a way to create a new national identity. With their songs of loyalty, love, politics, and revolutionary heroes; mariachi became a symbol of freedom for the people of Mexico.

Tools of the Trade

Aside from fierce musical talent, a passion for all things Mexican, and a snazzy charro outfit; a true mariachi band thrives on a variety of different instruments. These are the common instruments of the mariachi:

Vihuela: The vihuela is a creation of the Coca Indians of Southwestern Jalisco in Mexico. It has five strings and a bowed back, and it is slightly larger than a ukulele. It is played with a thumb pick in the rasqueado (strummed) style and is the harmonic foundation of the mariachi band.

Acoustic Guitar: A standard guitar is used and serves to supplement the vihuela as a rhythmic element in the mariachi band. The guitar and the vihuela typically play the same rhythmic patterns and keep a strong foundation for the group.

Guitarrón: The guitarrón is the bass foundation of the group and is arguably the most important element in the mariachi band. It serves not only as the bass of the group, but it gives the group its characteristic sound. It is said that if there is no guitarrón, there should be no performance.

Trumpet: A standard trumpet is used at various times, and supports the melody, adding an extra bit of soul to the mariachi band.

Violin: A standard violin is also used to provide rich texture and added emotional weight. Due to the versatility of the instrument, this tone can change from sadness to happiness in an instant.

Other instruments: There are occasions when instruments such as the flute, French horn, accordion, and organ are used, though these instruments are typically used for more specific arrangements.

During the 1950s Mariachi culture became deeply rooted in the United States, later expanding to the rest of the world. Today, mariachi music is played in places as far away as Japan and Europe; bringing their vibrant and often uplifting music to a whole new audience. Mariachi transcends both borders and ethnicity. It is more than just the music of a country. It is the music of pride, tradition, and freedom. If you are interested in learning more about Mexican culture, visit any of our Casa Blanca locations throughout Massachusetts!