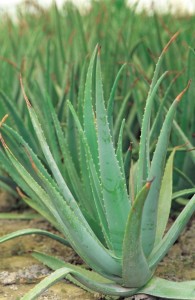 While the agave plant does look similar, it is not at all related to these plants and has quite the different use. The agave plant is edible and most commonly used for its juice. The juice of the agave has a number of different functions.

Of course, agave is most frequently used for fermentation into Mexico’s favorite sprit, tequila. Tequila and mezcal are both specifically made from the blue agave plant species. While you probably don’t need another excuse to consume tequila, we still included a margarita recipe below.

The second most common use for the agave plant is the sweet nectar that is extracted from its leaves. Agave nectar is a sweetening agent that tastes similar to honey but is sweeter (but has a lower glycemic index). You can replace honey with agave nectar in just about any recipe, and it is also a great way to sweeten cocktails. Since they both come from the same plant, tequila drinks and agave nectar go hand-in-hand. Agave nectar breaks down better than sugar does in chilled drinks, which is another reason that it finds its way into a number of cocktails.

If you don’t have any Cointreau on hand, agave nectar is a perfect substitute. Try this margarita recipe from The Kitchn.

Shake the tequila, lime juice, agave nectar, and water vigorously with ice and strain into a chilled rocks glass or coupe filled with ice. Garnish with the wheel of lime.

Optional garnish: before filling the glass with ice, moisten the rim and dip it in a dish of kosher salt.

Agave nectar is also a great ingredient to balance out the bitterness of vinegar in salad dressings. Simply whisk together the following ingredients from Lunchbox Bunch.

The agave plant also has practical uses. The spines have been used for writing utensils, and certain species yield a useful fiber much like hemp.

While agave is the sole source for tequila, not a lot of people know much about this plant. Now you are equipped with new ways to use it to its full potential (since you probably don’t have a distillery on hand).

If you love learning about Mexican culture and food, we invite you to dine at Casa Blanca Mexican Restaurant. At our locations throughout Massachusetts, you can dine on authentic Mexican food and drink awesome tequila drinks. Visit us today!