Tequila is made from the distillation of the juice from the blue agave plant. 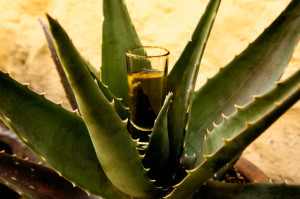 Pure tequila, made solely from the agave plant, begins its life in fermentation vessels. Mixto tequila (tequila that is not 100% agave) must first be mixed with sugar or molasses before fermentation begins. Then, depending on the subsequent process, the tequila will become one of the following five types.

Most gold tequilas get their color from the caramel coloring added to the tequila before fermentation. Watch out for brands that don’t cite “100% agave”, as those brands have added coloring and sugar to obtain the gold color. Gold tequilas are not typically aged, and usually contain only about 51% agave tequila. Sometimes 100% agave gold tequila is made by combining silver tequila and an aged tequila, such as reposado or añejo. Since quality aged tequila has a gold hue, the addition of the coloring was a marketing tactic to improve one’s perspective of cheaper brands.

Silver tequila, sometimes referred to as blanco, is rarely aged more than a couple of weeks, making it the purest form of tequila. It is often considered the best type of tequila to use in mixed drinks, and is commonly seen in margaritas.

Reposado means “rested” in Spanish, and reposados rest anywhere from two months to a year before they are bottled. Reposados take on the gold hue from the barrels in which they are aged. They are typically aged in oak or white oak barrels, and the type of barrel changes the flavor of each distillery’s tequila.

Añejo tequilas are aged from one to three years, and are considered the best type of tequila for sipping because of their smoother flavor. Añejo means “vintage”, and they are darker than reposado tequilas.

Extra or ultra añejo tequilas are aged for over three years. This is a relatively new type of tequila, which got its official classification in 2005. This type of tequila is the most expensive, not only because the flavor is improved with age, but also because distilleries will only allow their best spirits to age for so long. Extra añejo tequila should be enjoyed, not shot or mixed.

Now, the next time that you are poking around at the liquor store or are ordering a drink at your favorite bar, you’ll know just what to order.

Try out your tequila knowledge at Casa Blanca Mexican Restaurant in Andover, North Andover, and North Billerica, Massachusetts. We are an authentic Mexican restaurant that serves up a number of quality tequilas and tequila drinks.

Craving Mexican? We got you covered! Order online

Don't shrimp out on us! Order takeout today! Link

They told me to follow my heart. Guess where it le

Feel like you can't choose? Don't! Get the fiesta