The Day of the Dead in Mexico isn’t so much a religious holiday as it is a cultural holiday. The holiday and the sugar skull tradition serve to celebrate the lives of deceased relatives. 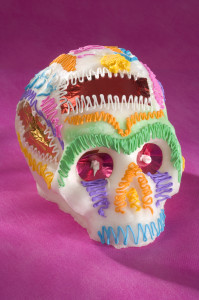 The day of the dead is a Mexican holiday that has been celebrated for generations. It serves to honor family members who have passed on by celebrating their lives with gifts and fruitful offerings on November 1st and 2nd each year. Traditionally, the most important element of the Dia de los Muertos is the alter, or offerings that families create to honor their loved ones. The altars are adorned with flowers, food, and other decorations, as well as the deceased individual’s favorite things.  In rural villages, families have been known to spend up to two months’ worth of their household income preparing for the holiday.

Sugar skulls are one of the defining elements of the Dia de los Muertos, as sugar has had a long history in Mexico. When Spanish colonizers arrived in (what is now) Mexico back in the 1500’s, they quickly discovered that the landscape was perfect for growing sugar. Over time, the production of sugar in Mexico took off, and soon became a plentiful resource for the Mexicans.

Sugar skulls started making their way into Dia de los Muertos festivities as early as the 18th century. The skulls are decorated with bright colors and adornments, and often bear the name of loved ones across the forehead. Because sugar is so abundant in Mexico, the sugar skulls are the perfect way for families, both rich and poor, to celebrate the lives of their loved ones. Believe it or not, not all sugar skulls are eaten. Usually, they are purchased or made as an adornment for the altar in the family’s home. Only specific types of sugar skulls (some even made of chocolate!) are reserved for eating.

Traditionally, sugar skulls were made in very small batches by skilled bakers. They were created with a mold, and often carved individually by hand to make each skull unique in its own way. Today, bakers will often spend months preparing for Dia de los Muertos festivities, as is it common for the sugar skulls to be sold at local fairs and festivals leading up to the days of the event. Unfortunately, the small scale sugar skull operations are becoming far and in-between as mass production of sugar skulls has become more common and less expensive than the traditional method.

A wonderful alternative to Halloween, Dia de los Muertos, or Day of the Dead is a wonderful cultural holiday that can be celebrated by anyone of any heritage. The holiday is becoming more popular in the United States as individuals look for a festive way to celebrate the lives of their loved ones as an alternative to mourning.