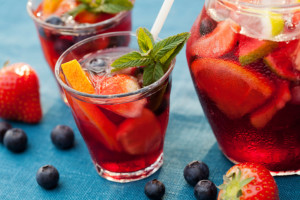 Mexican cuisine has some of the best alcoholic beverages. A night out south of the border can include tequila shots, a few margaritas, some incredible beers, and a whole lot more. Today, we will dive into one of the tastiest beverages, as we take in depth look into delicious and sweet Sangria.

What is Mexican Sangria?

Typically, Sangria is a combination of red wine, brandy, chopped fruit, and a sweetener. The sweetener is often sugar, orange juice, syrup, or honey, while fruits usually include melon, grape, peach, apple, orange, and mango. Most sangria is steeped and chilled, some for a few minutes, while others for a few days.

Sangria actually originates from Europe, most prominently Spain and Portugal, who brought it to South America during colonization. What we know as Sangria today has evolved over a number of years, as Europeans first drank spiced wine in the Middle Ages. Alcohol was very safe to drink back then, as most water was unpurified and therefore could contain harmful bacteria. The alcohol in beer, wine, and spirits killed off these harmful germs. This lead to many people across Europe experimenting with alcoholic drinks, which naturally included people putting spices and fruits in their wine.

Sangria itself officially got its start in Spain. When the Romans controlled the area around 200 BCE, they planted many vineyards across country. Vineyards were plentiful, which allowed Spain to ship their abundance of wines around the world. As a way to create more types of wine, they added spices and fruits to create wine punches. These wine punches were named Sangria, which in Spanish translates to “bleeding,” as a way to symbolize the drink’s red color.

Like any drink, there are many variations of Sangria. Here are a few of the creative offsets inspired by Sangria:

Here are a couple other fun facts about Sangria:

If you are in the mood for Mexican Sangria, or any other type of Mexican food or drink, come on into Casa Blanca. We offer an authentic Mexican dining experience that will make you feel like you are south of the border. Also be sure to check out our blog for more interesting articles and recipes.