The taco is not usually considered a mysterious food, but the history of the taco is in fact comprised of many unknowns. 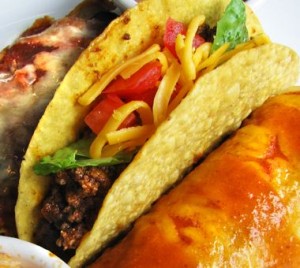 There is no exact date of invention, and the history of the taco varies among expert opinions. So where did this delicious dish begin?

We will discuss today what University of Minnesota and taco expert Jeffrey M. Pilcher has discovered regarding the history of the taco during his twenty years of taco time, (or taco research if you prefer to be scientific).

The History of the Taco: The Origins

The actual origin of the taco is the biggest mystery. The history of the taco dates back to the 18th century. Experts believe that the name of the taco traces back to the silver mines during this century. The dynamite used to access the ore below resembled a taco, as it was composed of gunpowder wrapped in paper. In this case, the gunpowder would be the taco meat, and the paper would be the shell. Experts have come to this conclusion because the first dictionary reference of the taco was “tacos de minero”, which means “miner’s tacos.” Although, there are some hints of tacos beginning to be referred to by this name, it is unknown when the original recipe was developed. Some believe that the dish itself dates back to the Aztec ruling of the area which is now Mexico.

The History of the Taco: The Journey to America

Many American-style restaurants have tacos on their menus.  How did the taco become a part of the American culture as well? The first recorded introduction of tacos came with the influx of Mexican immigrants during the 19th century. In Los Angeles, there was a group of female street vendors referred to as the Chili Queens. Street vendors were originally viewed as serving low class food, but when tourists began to swarm to the city, they would seek out the Chili Queens.  The Chili Queens became a core part of the L.A. experience, and as the next generation of these original Mexican immigrants climbed the social ladder, the taco gained more stature. The recipe became altered based on the available food in the American industry. The meat used was beef, and lettuce and tomatoes were used to fill it. As Taco Bell introduced the business model of a franchised restaurant based around this Mexican dish, the taco assimilated with the American culture.

Although the history of the taco may be a bit mysterious, it is no mystery that they are delicious. They may have become a part of American culture, but there is no restaurant like an authentic Mexican Restaurant like Casa Blanca to show how to do tacos the right way. If you’re craving some tacos tonight, come in for a visit at one of our locations in Andover, North Andover, or North Billerica. Our tacos are no secret, and we are always happy to share with our guests.

What’s your favorite meat to put in your tacos? Do you like your tacos spicy or mild?

One thought on “The History of the Taco”