One of the things that Mexican food is well-known for is the flavors that its food contains. 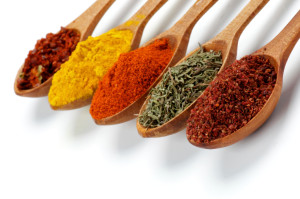 When you sit down to have an authentic Mexican meal, you should be fully prepared for it to be filled with flavor! What people often don’t realize is that not all these seasonings correlate to spice in the heat sense. In fact, authentic Mexican food is rarely spicy, only flavorful. So what exactly are the Mexican spices most commonly used in Mexican cooking?

We have listed the most used Mexican spices and how they positively affect the dishes you love. Some of these Mexican spices may surprise you, because you may be able to find them in your own cabinets!

Garlic is one of the most common Mexican spices. Garlic can be found in fresh, jarred, or powder form. It is often incorporated into salsa and taco seasoning. A Mexican spice that is commonly used in conjunction with garlic is onion powder.

Oregano is another commonly used Mexican spice. There are many different types of oregano, such as Mexican oregano and Mediterranean oregano. Adding oregano to your Mexican dishes will create a fresh, earthy taste.

Cumin was actually discovered somewhere in the Mediterranean, but it is a huge part of Mexican dishes. Cumin can easily be grown all over the world, which has caused its popularity to expand.  It has a bitter, somewhat toasty taste that can’t be replaced by most other spices; this makes cumin a quintessential Mexican spice. Cumin is frequently a flavor used in taco seasonings.

If you combine the previously listed spices and add some chiles, you will create chile powder.  While other spices are sometimes thrown into the mix, cile powder mainly consists of oregano and cumin with chiles. Chile powder is often used to season meats and vegetables, but it has other uses as well. There are many different varieties of chile powder, including ancho and chipotle, which each have their own unique recipe.

Although every Mexican recipe varies, the spices used are generally consistent. Without Mexican spices, these dishes would lack the flavor that we have come to enjoy!  Here at Casa Blanca Mexican Restaurant, we have a lot of experience with these spices and we can adjust the heat of your dish to your exact preference. We proudly serve authentic Mexican food made fresh daily.

Which spice is your favorite to put in a Mexican dish?

If you're not at Casa Blanca then today is nacho l

If you didn't have #salsa, did you even go out for

I was going to be productive today, but getting ta

Overly cheesy, you say? 🤨 Is that even a thing?

Don't shrimp out on us! Your dinner is waiting for