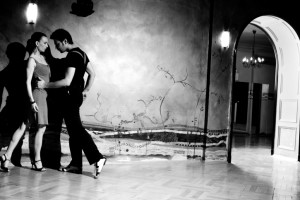 It is widely accepted that Salsa dance began as a blend of a few different dances from various backgrounds and cultures. Salsa dancing is an incredibly social dance that got its start in New York City in the 1930s.

Hispanic in origin, Salsa dancing is comprised of a variety of dance styles, including Rhumba, Mambo, Cha Cha, Charanga, Merengue, and many others. While each of these dances have their own flare, bits and pieces from each of the dances were combined to create what we have come to know and love as Salsa. Therefore, it is impossible to pin down a true origin of the dance, as it has been created from many different Hispanic dances with varying backgrounds.

Salsa: What’s in a Name?

There is much debate as to how the name “Salsa” originated for the dance. Some believe that it was a phrase that musicians would shout as they played the music, while others believe that the term came about because of the dances hot and spicy connotations. Similarly, there are some that believe that the dance got its name from its likeness to salsa, in that it is comprised of many different and unique parts, much like the food itself.

The Movement of Salsa Dance

In the 1930s, many people immigrated from Cuba and Puerto Rico into the United States, with a large population landing in New York City. Salsa music and Salsa dancing was born, the result of different Hispanic cultures coming together. The dance has experienced variations through the years, including elements of Afro-Caribbean and Afro-Cuban dances.

The dance itself involves the shifting of body weight by stepping, while keeping the upper body level and unchanged by the movement of the feet. As the dancer moves, their hips shift with the movement of their feet, which plays into the notion that Salsa dancing is highly sexualized. The dance itself was born in a social atmosphere, and continues to be a social dance that is very fluid and in such settings can become rather improvised, given the colorful variety of dances that Salsa originates from. However, competitive Salsa dancing has grown from the social variety. While competitive dancing may emphasize form and proper steps, the dances are in no way ridged, and you certainly won’t see a lack of movement!

If you are interested in learning more about Hispanic culture read our blog at www.casablancamexican.com. Or, come by Casa Blanca Mexican Restaurant in Andover, North Andover, Haverhill, and North Billerica MA to enjoy delicious Mexican cuisine. In addition, keep an eye out for our newest restaurant opening soon in Methuen, MA!