It’s difficult to visit an American fare restaurant without seeing nachos, tacos, or quesadillas on the menu these days. The United States is a melting pot of various cultures, and assimilating Mexican cuisine into our daily eating habits is no exception. In fact, salsa has become the number one condiment nationwide, surpassing ketchup and mayo, seemingly the most American of all of the condiments. And tortillas have now been outselling hot dog buns since 2010. 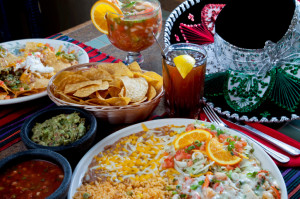 But when did this happen? And how?

Of course, the number one reason for the influx of Mexican food in America is immigration. Many Mexican-Americans have continued to serve their cultural dishes as a symbol of pride for their ethnicity, as well as for nostalgia’s sake. Many Mexican immigrants opened their own traditional Mexican restaurants, much to the delight of Americans everywhere. Being so close to Mexico, it only makes sense that the U.S. would pick up elements of the Mexican culture. In fact, the invention of Tex-Mex (which occurred in the 1940s) is best example of our integration with our neighbor country, as Texas actually touches Mexico, and the cuisine is a fusion of the two.

The manufacturing of tortilla chips in the U.S. goes back as far as the early 1900s. However, they were not made due to a popular demand—instead they were just a way to use up the leftover dough from making tortillas. They were truly launched into American culture when the Texan company, Frito-Lay, mass-produced the Dorito, marketed as a more flavorful tortilla chip, in the 1960s. Then Tostitos became Frito-Lay’s fifth largest brand by 1985.

On the other hand, nachos were actually said to have been spurred by American tourists in Mexico, according to CNN. “When two American customers walked into his restaurant in Mexico, head waiter Ignacio ‘Nacho’ Ayala couldn’t find the chef so he threw together some random ingredients and called them ‘Nacho’s Special,’ Arellano said. And the rest is history.”

Due to the United States’ love of Mexican cuisine, Mexican restaurants across the country are thriving. Americans who have visited Mexico are also causing for a push toward more authentic cuisine, rather than settling for Tex-Mex meals.

If you love traditional Mexican food, then you will love Casa Blanca Mexican Restaurant. Even though it’s nowhere near Mexico (instead, it’s in the Northern part of the country in Massachusetts), Casa Blanca maintains true to Mexican heritage in both décor and cuisine. Visit one of our locations in Andover, North Andover, or North Billerica to find out for yourself!

We're so thankful (for nachos, of course), but mos

The perfect holiday gift is a Casa Blanca gift car